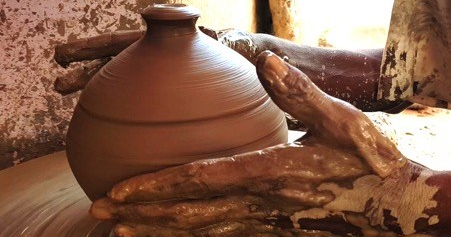 Hi again – Alessandro here.  After spending 4 months in India, studying ancient ceramic artefacts and working on the excavation at Lohari Ragho (link), Haryana, I am finally back in Cambridge, with plenty of samples. As mentioned in a previous blogpost (link), I spent several weeks at Banaras Hindu University, Varanasi, looking at cultural material from a few Indus sites. However, I also had the chance to leave the laboratory and take a break from Bronze Age people, and talk to modern communities of crafters – more specifically traditional potters –  who live in small-size villages in Haryana and Uttar Pradesh, North Western India.

My ethnographic, or ethno-technological, research is helping me think about archaeological questions and problems related to issues of rural ceramic production and regional networks of crafters. There are many aspects of ancient ceramic industries in South Asia that can benefit from research on modern traditional potters: for instance, the interaction with landscapes, ‘clay-scapes’ and changing environments; the transmission of knowledge within families through generations; the network of crafters connected via marriages within India’s caste system; the seasonal production of ceramic artefacts; social identities and the role of women and men in the production of vessels; and a comparison between archaeological and modern rural tools and technologies. Some ethnographic studies on crafters from other regions, e.g. Rajasthan, India, are available, but an understanding of modern ceramic traditions in Haryana and UP are still missing.

I had the great opportunity to learn from and interact with potters affiliated to a Hindu endogamous* caste (jati) and various exogamous sub-casts (gotras) that are broadly referred to as the Kum(b)har community. It took me a while to understand the complex interaction among groups and subgroups of Kumhars, who are the traditional potters of Rajasthan, Haryana and Uttar Pradesh. Nonetheless, I was lucky enough to meet friendly people and spend time with their families while drinking – a lot of – chai (tea).

Nowadays, the manufacture of pottery in villages is slowly disappearing, possibly due to lack of demand and modern systems of production. However, new generations of Kumhars keep alive long-lasting traditional craft of some types of vessels that seem to be particularly dear to the hearts of local families. In fact, they still produce vessels used during Hindu festivals and rituals, e.g. the festival of lights Diwali or weddings, and typical ceramic water jars (matka) and drinking cups.

Talking to these potters allowed me to understand aspects of the production and distribution of vessels, from clay sourcing to firing and commercial transfer of final products. Amongst the problems that archaeologists – and especially ceramic specialists – face when researching ancient artefacts is the study of forming techniques or manufacturing processes. Observation for this ethnographic work helped me to fill some of the gaps in my general understanding of pottery making in India, but most important it also helped to look at the landscape, adaptation to seasonal climate variability and rural family traditions with different eyes –  the eyes of long-lasting linages (parampara) of crafters.

Besides the obvious anthropological and archaeological implications of this work, it was rather fun and inspiring to visit those villages and families. Potters from Khanak, Lohari Ragho, Rakhigarhi and Alamgripur were very happy to share their experiences and stories of their ancestors with the public, which is a precious baggage of vernacular knowledge that would be otherwise inaccessible. These traditions are an important part of the intangible cultural heritage of South Asia.